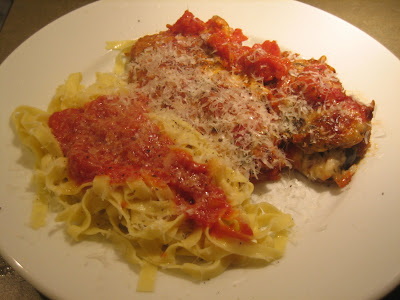 Eggplant Parmesan is one of my all-time favourite comfort foods (just like baked macaroni). It seems like it should be a complicated thing to make, but it's not really.

Tonight I was inspired by one lonely left-over eggplant and a couple of haggard-looking tomatoes. Here's what I did with them.

Sauce (I learned this from Cristina)
I peeled the tomatoes. (I usually just pour boiling water over them in a bowl, and in one minute the skins begin to split are really easy to peel off.) I chopped them up, threw them into a sauce pan with some butter, fresh basil, chili flakes, half an onion (unchopped), and salt.

I let these ingredients simmer together on medium-low while I prepare the rest of the meal.

Eggplant
I sliced the eggplant up and sprinkled salt on each slice, let them sweat, and dabbed the moisture off with a paper towel. After that, I dusted each piece with flour, coated with egg, and then covered it with bread crumbs. (I use panko crumbs, the Japanese kind, because they fry up so nicely.)

I heated about a inch of canola oil in a frying pan and tested with with crumb or two before putting in the eggplant slices in. 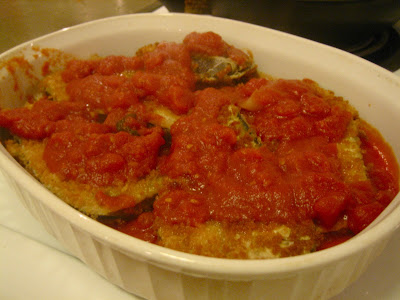 Once the eggplant is fried and the sauce has simmered for a while (45 minutes?), I poured a layer of the sauce into a casserole and then placed the breaded eggplant in the dish in one layer. I put a bit more sauce on top, and finished it off with a layer of mozzarella and dried oregano and basil.

Tonight I was lucky because I had some leftover fresh pasta noodles. A very yummy and filling accompaniment for my eggplant. 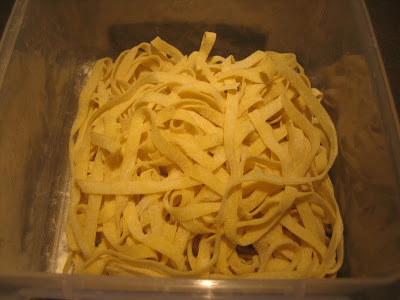 Is there anything eggplant *can't* do? Very tempting pics...I'm feeling hungry...