I made the first carrot cake of my life

...and it was delicious!  I'd highly recommend this recipe.  It was for a friend who is having a birthday and her favourite cake it carrot cake.
http://www.epicurious.com/recipes/food/views/Mother-Bertas-Carrot-Cake-107118
I was glad to have an opportunity to try it.  I'll make it again, in fact!

I reduced the sugar and added a few tablespoons of diced candied ginger. 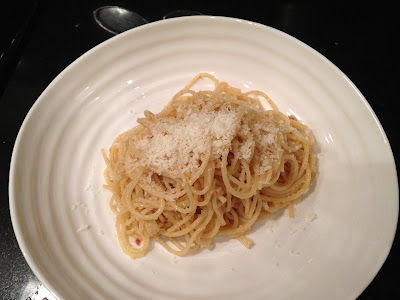 This pasta will punch you in the face with flavour. I learned to make it from a special woman named Jane Porter. It's a longtime favourite in her family, and now it's a staple in mine.
It's so simple, it's laughable. This is how you make it.

Combine the first four ingredients in a frying pan and simmer on very low heat for approximately 20 minutes. 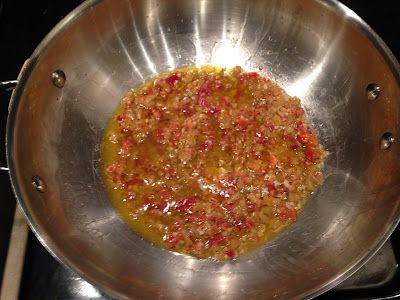 Cook your noodles.
Once all is cooked, combine and add generous helpings of parmesan. Portion into pasta bowls and sprinkle with more parmesan and salt (if necessary).
Next, eat it with your mouth! Enjoy.
Posted by claire at 7:52 PM No comments: 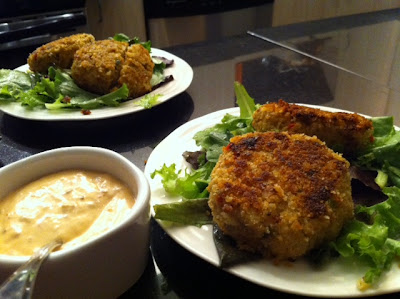 These crab cakes earned me the moniker "Stellar Mermaid from Outer Space." It's a badge I wear proudly.
Posted by claire at 3:11 PM 1 comment: 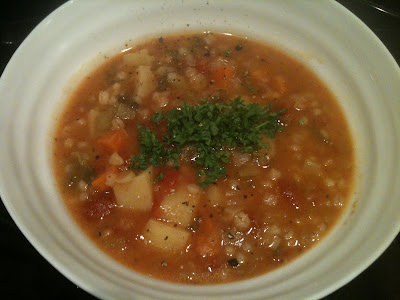 Okay, I've finished eating my third bowl of this soup, and I'm seriously tempted go for one more. This recipe is a winner, so I wanted it recorded here before I forget what I did!
First, it takes its inspiration from the Cook's Illustrated Farmhouse Vegetable & Barley Soup. (You'll have to sign up for 4-week trial in order to access the recipe.) That said, I changed a few things, so here, for the record, is my version.
Ingredients
1. First I ground the dried mushrooms into a powder using my coffee grinder. 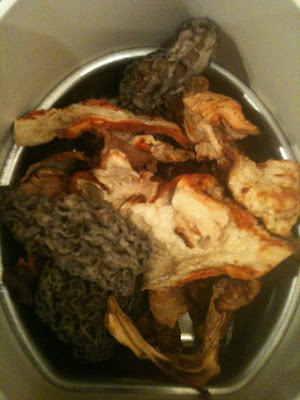 2. I then chopped up the carrots, leeks, and celery. I melted some butter in a big sauce post. And the veggies went into the pot with the soy sauce, wine, and some salt. I sauteed them for 10 mins. 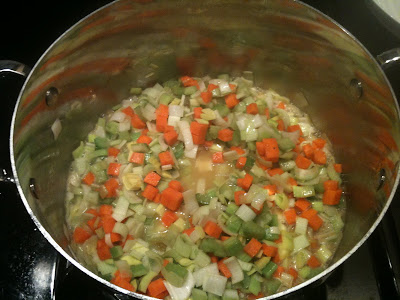 3. Next I added all the liquid ingredients (water, tomatoes, and stock), 2 teaspoons of the ground mushrooms, the sprigs of parsley and cilantro, the pearl barley, and the smashed garlic. I brought these to a boil, then turned down the heat a bit and let them simmer for 25 minutes partially covered.
4. At that point, I added the cubed potatoes and the kale, and I let the whole thing simmer for another 25 minutes (testing the potatoes a few times for doneness along the way).
5. When everything was done, I fished out the parsley and cilantro sprigs and the clove of garlic. I also skimmed the scum off the top of the soup because I heard once that this contains bitter elements from the vegetables. I'm not actually sure if this is true or not.
6. And finally, just before serving the I mixed the rind of one lemon with the 3 tablespoons of butter and stirred it into the soup until melted. I know a lot of people would be tempted to skip this last step, but don't. It's so worth it.
And that's it. Pretty much the best vegetable soup I've ever made in my life.
Posted by claire at 9:20 PM 5 comments: 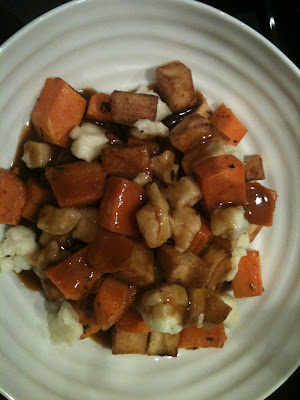 I'm a sucker for poutine. And this, quite frankly, can be tough for a vegetarian. Tonight I set out to create the ultimate, from-scratch poutine. And I have to say, I'm pretty impressed with the results.
The whole thing began with this vegetarian stock recipe. It's the richest broth you'll ever taste, and I defy anyone who doesn't know better to identify its meatlessness. And, it's such a perfect opportunity to use up that last cup of red wine that's been on the counter just a little too long.
Here's how the stock began life: 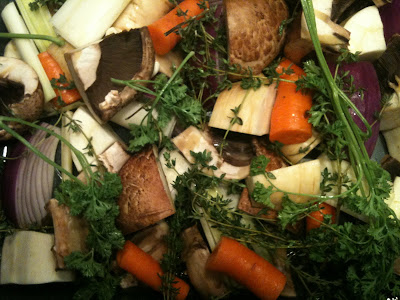 When the vegetables were happily roasting, I began frying my potatoes. I filled my cast iron pan with approximately an inch of oil and on medium-high gently fried my little potato chunks. (I didn't do a regular fry shape because they break so easily and are kinda a pain to stir, shovel, etc.) 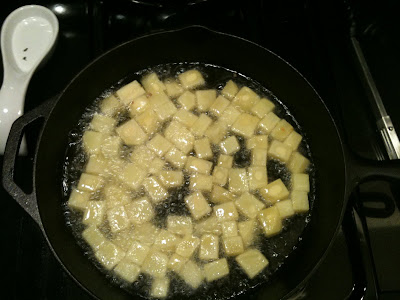 I also cut a bunch of yam into cubes. Coated them in olive oil. And threw in some chopped thyme for fun. These went into the oven until they were done.
When the stock was finished, I put it in a sauce pan, added 1/4 cup of butter, and 2tbsp of cornstarch already dissolved in 1/2c of stock. (I think, although I'm not 100% sure, that a good formula for thickening gravy is: 1/2tbsp of cornstarch for every cup of stock.)
And of course once that was done, I assembled my creation: potatoes, yams, cheese curds, and gravy.
Et voila! Veggie poutine.
Posted by claire at 9:23 PM 2 comments: 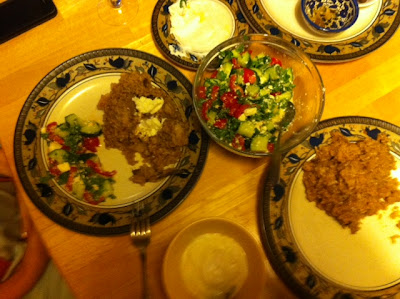 Wow, I really have not been excelling in the photo department lately. Well anyway. This captures a memory of my meal last night, which was enthusiastically shared with the lovely Claire. I finally tried MAQLUBA! I was in the Middle East in April, and have had a love of Middle Eastern cooking for over a decade, and Maqluba is one of my favourites. It literally means "Upside Down", as all the vegetables and meat (more on this later) are layered on the bottom, and then the rice cooks on top. Then you dump the whole thing over onto a large platter and VOILA: Maqluba.

Okay, but here's what I did. First, I have the massive advantage of having bought "Maqluba spice" at a grocery store in Palestine. I know, that's cheating, but whatever. But since none of my Palestinian friends were able to tell me exactly how to make this thing, I was fumbling in the dark and knew this spice blend could light my way.

With Claire's help we uncovered this link to help give us further direction. But neither of us are into meat, so we wanted to vegetarian-ize it.

Here's BASICALLY what we ended up doing:
1. Heated up a bunch of olive oil
2. Sauteed onions. Added garlic, cauliflower (the MOST important veggie of Maqluba) and some thinly sliced potatoes.
3. Sizzled on low for a long time, til things begin to soften. Added more oil as needed. Stirred in some of the maqluba spice (which is probably a combo of the spices as listed on that link, above).
4. In a separate pan, I sauteed thin slices of eggplant in olive oil. Drained them on a dish towel, added them to the other veggies in the pot.
5. Then added about 1.5 cups of brown rice on top of the veggies.
6. Then added about 6 cups of veggie broth. It was agreed in the end that this was WAY too much water, it needed to cook forever. Add just enough veggie broth to cover the rice by about an inch.
7. Cook until done!

Serve with yogurt, tomatoes, cucumbers and other arabic fixings (Labne is featured in the photo).

It was good. I'll make this again and get better at it. And I hope I've done my Palestinian pals proud!

Smashing up your herbs 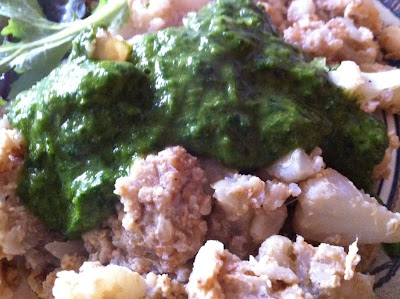 While this photo looks disgusting, actually, it was quite tasty! Here's the punchline: this is cilantro sauce on cauliflower (sautéd with spices and walnuts).

But here's what I want to talk about: for the first time in my life, I was able to use the ENTIRE bunch of cilantro without letting it wilt and tossing it. I was inspired largely by this on-line recipe...very delicious. I used my handblender to mash it all up. I realized this approach (adding oil, mild spice and vinegar to herbs and smushing it) would apply to ALL the herbs that typically go bad in my fridge. I feel so guilty about this as I love fresh herbs, but never seem to figure out how to use them all up (and I have a north-facing balcony, so an herb garden for me is unlikely!)

Anyway, super delicious and would add tasty-ness to any dish. For your consideration. All of you. All of the millions of you out there reading this. :)
Posted by c-licious at 10:05 AM No comments: