My Trip in Food 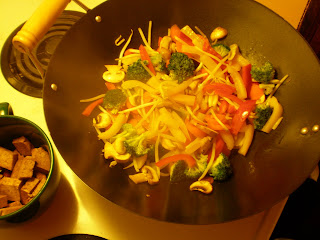 What better way to remember a trip than through what became part of you along the way...food! Plus, when you are on a trip people tend to be cooking for you which makes my stomach and heart full of appreciation.

I just spent a week in Virginia/Washington DC visiting my friends at the university I'm enrolled in (Eastern Mennonite University's Center for Justice and Peacebuilding www.emu.edu/cjp). I'm not going to get into the whole distance learning thing...suffice to say I spent the Spring 2007 semester on campus with fellow students from all over the world...and became particularly close to several friends from the middle east. Not just because of what they cook for me, but it helps :) 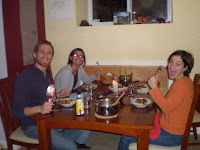 First when I landed in Washington I was hosted by Aaron and Susanna...Susanna made an awesome "wish-we-were-still-in-BC" hippy meal of delicious veggies & beans, tempeh and Bragg's sauce (right). Perfect. 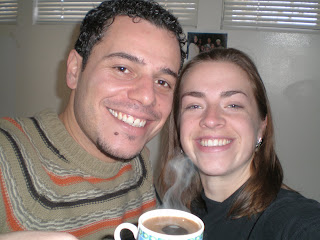 The next day I headed to campus where Fadi (Palestinian, above) treated me to our traditional Arabic coffee ritual...a habit we had of procrastinating the papers we had to write and enjoying a chat and a coffee. Fadi finds the arabic coffee at the arabic store or brings it from back home and boils it with...wait for it...cardamom pods! He serves us in little mini tea-cups. Unbelievable. 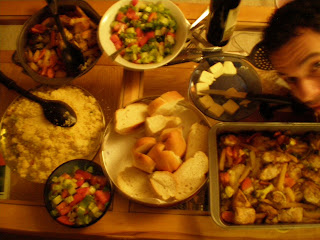 Later in the week, Ruba (also from Palestine) made two incredible meals. One supper included vegetables and chicken prepared with all-spice, lemon and olive-oil (above). I leave my vegetarian ways behind me for such occasions. In case that worries anyone, there was also couscous. To top it off, she made fresh-baked chocolate chip cookies for dessert. I didn't stand a chance. 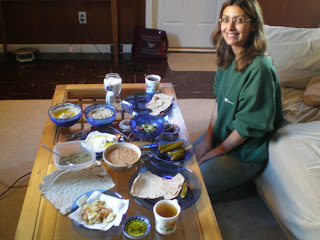 The "piece-de-resistance" was the Palestinian lunch (above) Ruba prepared for me the next day: Foule (fava beans which she heats on the stove directly in the can on the element!) 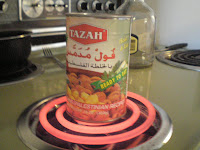 , Lebne (dehydrated yogurt) with zathar (dried thyme), Baba Ghanoush, Hummous, FRIED cheese, pita and arabic pickles. Everything covered with a generous layer of high-quality olive oil. Let me tell you, I thought I would never recover from the bliss. Pretty much all I could do the rest of the day was figure out how to enlarge my stomach so I could eat more next time. 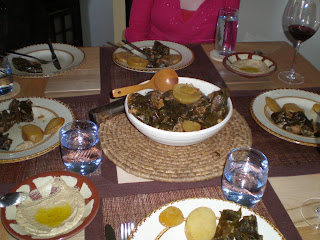 And the bliss didn't end there. Oh no. On our way back into Washington DC, Ruba and I stopped off at my friend Esselle's house. An unforgettable feast awaited us. Esselle, living in the States but originally from Iraq, made us home-made Baba Ghanoush with smoked eggplant. 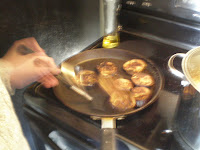 And the MOST DELICIOUS DOLMAS I have ever eaten. For those unfamiliar, Dolmas are vine-leaves wrapped around deliciousness, namely rice and almonds and sultanas, and onions and cilantro and all manner of spices. I think he had been preparing it all day...when we asked him what went into the dish, he spoke for about 5 minutes, while I salivated all the more. A true work of art, that meal. I hope to get the recipe :)

Finally, I had a brief stopover in Hamilton, where I managed to once again take advantage of the hospitality of others and be cooked for. I was prepared a delectable stirfry with marinated tofu and Udon Noodles (featured at the top of this blog-post). Two words for you: comfort food! I have not often ventured into the world of Udon Noodles, but I have a feeling they will become a regular on my shopping list. Two more words: Delicious and Yum!

My cellophane packet of chili corn crisps on the flight home left me somewhat deflated food-wise, but I had my memories to soothe me. Here's hoping to spend more quality time travelling through people's kitchens! Cheers!
Posted by c-licious at 2:14 PM

Catherine, what a mouth-watering summary! I can't over-state my keen interest in that dolmas recipe. Yowza.

Hope these friends of your can make it to Vancouver some time.