Ms. Claire and I met up in the early evening to plan our meal and happily decided to make an eggplant parmesan for dinner. We had differing recipes so we divvied up the work – the marinara sauce to her, and the eggplant and assembly to yours truly. But first things first, we had to get groceries, which included a bottle of cava and a bottle of red (which, with the help of Kristin, we finished(!)).

Onto the food: First I sliced the eggplant and roasted them. 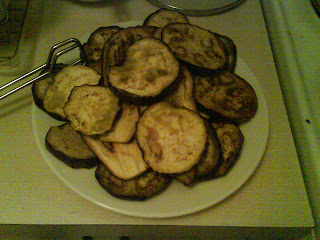 In the meantime, Claire started her sauce… which includes no chopping. Now, I know that some readers on this site might be slightly shocked by her methodology (as I was), but I can tell you that it was surprisingly delicious and I will never doubt Claire again. She peeled the tomatoes, and the onions, and just stuck them in a pot along with some basil and spices to reduce (see below for pic). And that was it. While this may seem like no proper way to make a sauce, Claire has since assured me that the recipe “hails from Italy” – and really, who am I to argue with such pedigree? 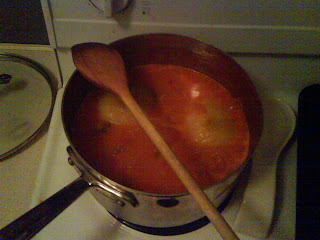 Once the aubergine was roasted, we coated them with some benko breadcumbs and began the layering process of sauce, eggplant, and mozzarella cheese. I usually use buffalo, but Choices was lacking, and we used a less moist mozza, which still worked very nicely. We stuck it in the oven heated to 375 for about 20 minutes, and then turned it up to 450 for another five to get the top a little crusty. Once done, we sliced up some baguette and had a delightful (and slightly drunken) meal. Unfortunately, we do not have a photo op for the finished product because we were so hungry.

Seeing the success of our previous encounter, we decided to have another fun-filled evening of cookery and wine. After a short debate between tomato soup and roasted veggie couscous, we settled on pan fried cod, garlic mash, sautéed spinach, with homemade aioli. The recipe for the cod, mash, and aioli are all found in Nigel Slater’s “Real Cooking.” This menu is one that I’ve done before, and can easily be multiplied for a lovely dinner party for large numbers. 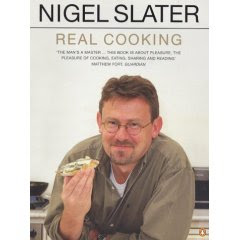 Aioli: We did all our prep (potato peeling and debating between washing the fish or not), and then proceeded with the first of two attempts at the aioli. Lacking a mortar and pestle, I finely chopped the garlic down to a clump of mashed garlic. Then we beat two eggs and added some salt and the mashed garlic. Now, here’s the tricky part. The first time around, something went wonky and we were stuck with a pool of yolk and olive oil. *sigh* But Claire, being the genius that she is, checked online, and discovered that we had to literally add the oil one drop at a time until the mayonnaise forms. So we started again with the whole chopping garlic process but this time were extremely cautious with the oil. It worked! And we had proceeded armed with the knowledge that the very least, we had a kick ass aioli to look forward to.

Garlic Mash: While the aioli was in process, we had put water on to boil and cooked the cubed potatoes (along with two cloves of garlic – hence “garlic mash”). We strained the taters, and Claire made an excellent mash. Adding butter and cream, she whipped (with a fork, no less!) the potatoes into a light and fluffy concoction that made me very happy *yay!*

Spinach: We made the spinach and cod last because they took the least time to cook. This was already 1.5 hours after we started (mainly due to the mishap with the initial aioli). Luckily, Claire was prudent with her decanting measures, and we had not run out of wine *double yay!* For the spinach, I smashed two cloves of garlic and browned them with salt in a super hot pan. Then I threw in the spinach, and added a dash of milk. I gave the spinach a toss or two, and once they had all changed colour, they were ready to go.

Cod: By this point we were starving, so no time was wasted. The recipe called for some oven time, but we got cod that had no skin, which meant less cooking time. We went for a pan-fried version. We seasoned the cod with salt and pepper. In a med-high heated pan, I added some oil and butter so that the pan was completely coated and then some. I placed the cod into the pan and let them sizzle for about 3-4 minutes on each side. We decided to take them out when the fish was just cooked (with a little pink in the middle, which was gone by them time we plated). 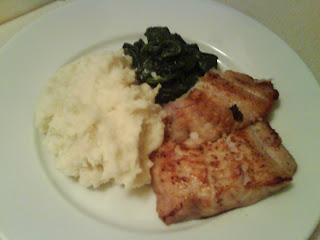 And voila! A decidedly garlicky and delicious meal for two.

*NOTICE: My apologies for the tardiness of postings. But I am technologically inept and therefore have just realized that it is possible to transfer files from my cellphone to my laptop via BLUETOOTH (which I now firmly believe is the best invention ever.)
Posted by catherine w. at 2:47 PM

What a great summary, Catherine! I would just like to add that the cod meal was a success due to your expert judgment with the frying. It was perfectly done, buttery and scrumptious. I shall try to remember your techniques.

And I'm glad to see that the sauce survived your post unscathed. I needn't warn Cristina, now. Phewf!