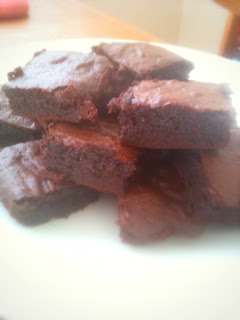 First, a confession: I've only ever used a mix to make brownies. I was (note the use of past tense) under the impression that since they tasted so good, I was wasting my energy tracking down a from-scratch recipe. (And really, I had empirical evidence that it was true: my brownies sold out at my Amnesty International bake sale in grade 11. The homemade? Not so much).

But the cover of March's Bon Appetit screamed Best-Ever Brownies, and I had to admit, they looked pretty damn good. They advocate for using cocoa instead of chocolate in chocolate recipes - that the result is richer and more chocolaty. And even more controversial, they say that Dutch processed should take a pass - it's not nearly chocolaty enough.

I've made these brownies for the past three weekends for dinner parties, and I've now completely abandoned my boxed-brownie past. They're rich, moist and chewy with a good crackle top. You get an extra-rich flavour from browning the butter first.

And as far as prep time goes, it doesn't get any better: about 10 minutes all-in, and just one pot to clean up. (Even the pan is a cinch, since you bake these in a tinfoil-covered pan.) I cut back on the sugar a little, and dropped the walnuts. Because really, brownies shouldn't have walnuts.

My excuse to make them this weekend is that my friend Susan Juby is having a book launch for her first adult book, The Woefield Poultry Collective, next weekend. I've knit her a chicken, and now I've made her some brownies. I think that's a good celebration.

Given that it's a week away, I'm going to be freezing these - but according to one of my favourite bloggers, David Lebovitz, I'm only improving on the recipe. I'm looking forward to providing more empirical evidence.

Bake brownies until toothpick inserted into centre comes out almost clean (with a few moist crumbs attached), about 25 minutes. Cool in pan on rack. Using foil overhang, lift brownies from pan. Cut into 4 strips. Cut each strip crosswise into 4 brownies. DO AHEAD: Can be made 2 days ahead. Store airtight at room temperature. 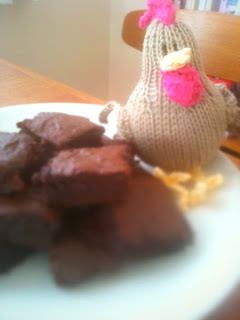 Mmm, that browned butter must have made these brownies into something absolutely superb. I have a sweet treat linky party going on at my blog and I'd like to invite you to stop by and link your brownies up. http://sweet-as-sugar-cookies.blogspot.com/2011/03/sweets-for-saturday-10.html

Fun idea Lisa! I'll have to link to that page - I've now got dessert recipes to last the year!