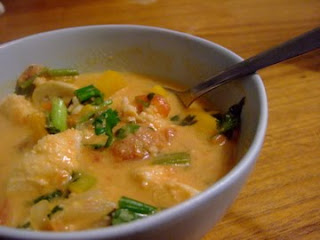 We're officially in the rainy season here, which means I'm officially in the soup season too. And pretty much in coconut milk season year round, so this stew recipe, modified from Bon Appetit's Fast Easy Fresh cookbook, is a regular go-to for me.

My dear friend Amanda was coming cover for dinner and a Christmas knit session (one project down, 600 or so to go), but I knew we were heading to the Whip for cask ales first. (Have you been yet? Sundays at 4:00, the perfect weekend ender.) I needed a one-dish wonder we could whip up (no pun intended) as soon as we got home.

I actually confused two recipes in my head when I was grocery shopping (I also adore James Barber's One-Pot Wonders, and his recipe for 20-minute bouillabaisse), so I picked up a pound of mushrooms. It's not in the Bon Appetit version, but I threw them in. I also left out the required shrimp and upped the fish portion (basa fillets in my case). I'm pretty sure prawns (unless they're local spot prawns) are one of the no-gos on the Sea Choice list, but now I don't know about Basa. Gah, so much to think about.

I also upped the lime juice and added a bit of sugar at the end, giving it a little more sweet/sour kick.

Either way, this recipe rocks. Amanda and I had it done in about 20 minutes flat, prep and all. All right, maybe 25. But we had two (and a half) Whip pints to keep us moving.

Thanks for posting Anicka! It was indeed delicious and a recipe I will certainly make one of these wet days.