How to cure a salmon, Swedish style 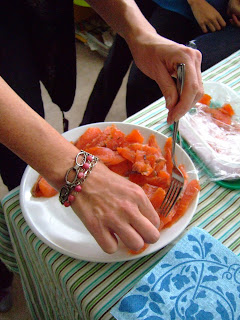 For the ninth year running now, I've been hosting an orphan Thanksgiving for everyone out here without family to celebrate together (and in fact, doors are open for those with family too - I host on the Monday so they can double up on pumpkin pie).

It's a potluck, so everyone brings something awesome: Matt does his cheese ball (recipe to come), I made an awesome maple-syrup-and-rum-soaked sweet potato dish from Bon Appetit, and Melissa Edwards (organizer of the epic 3-day novel contest) brought the star of the show: Gravlax, or cured salmon, Swedish style.

We cleaned the plate, twice, and she generously offered to share her recipe with us. I'm so trying this out for Christmas this year.

Gravlax
A Swedish method of curing salmon. Typically served as part of a Christmas smorgåsbord.

Ingredients
Two equal-size salmon fillets, skin on (can be a small or as large as you wish. I usually buy a whole salmon and have it filleted at the store)
1.5 cups sugar
3/4 cup salt
2 tbsp white pepper, coarsely ground
2 tsp dill seeds
3 bunches of dill, coarsely chopped

(Amounts are for 6 lbs of salmon. Adjust as needed.)

Remove the pin bones from the salmon with needle-nose pliers. Mix the salt, sugar and pepper together and pat it all over the fillets, applying heavier in the thicker parts and lighter in the thin parts. Pat it into the sides and any cut ends as well. 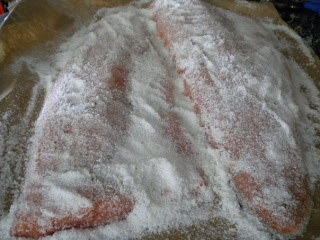 Sprinkle on the dill seeds, then pile the dill on one fillet. Lay the second fillet over top to make a sandwich with the skin sides out.
Since I make a lot, I usually cut the “sandwich” into thirds at this point. Wrap each chunk tightly in plastic wrap (seal well) or into small ziploc bags with all the air pressed out. Lay them on something that will collect any leakage, and place another flat surface on top. (I usually put them into a cake pan, then put another cake pan on top.) Put it in the fridge, and put some heavy things on top of the upper pan (jars of pickles, whatever you have).

Leave in the fridge for at least 48 hours and up to five days. (It will get saltier the longer you leave it.) Turn the chunks once every day.

When cured, take the fish out of the plastic and scrape off most of the dill and salt film. Wrap what you want to save in tinfoil and freeze. To serve, cut thin slices off the chunk with a fish knife. Serve plain or with a mustard-dill sauce (available at Ikea - or mix honey mustard, canola oil, a bit of vinegar, dill weed and a bit of salt and pepper to taste).

Anicka, you're turning into a prolific food blogger! This sounds amazing...I'm so sorry I wasn't there to taste it!

I'm so impressed! Thanks Anicka, and Melissa!