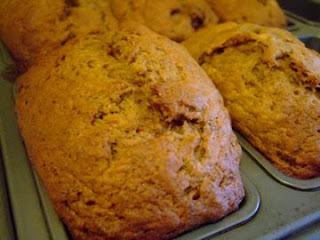 It's a rainy weekend here—one of those days when I give myself permission to forgo my run and laze around for the morning in pjs. I was catching up on my food blogs when I stumbled on Smitten Kitchen's banana bread experiment. Since my blender broke a few weeks ago, I've had a bunch of bananas without a smoothie destination. PLUS I had this funky mini loaf pan I've been meaning to test out (it was given to me by a friend of a friend, who was purging her apartment of her boyfriend's exgirlfriend, one baking item at a time). It was kismet.

I love that she used bourbon in her recipe, though for the second time in a week, I was without the required alcohol in my pantry (last week it was brandy for brandied raisins in this sweet potato recipe.) So this banana bread is booze free, though I'd throw it in next time around.

Otherwise, top marks for this recipe—moist without being greasy and just right the level of spice. Next time I'd add raisins. Never chocolate chips. I've got a hate-on for chocolate in baking.

Preheat the oven to 350°F. With a wooden spoon, mix butter into the mashed bananas in a large mixing bowl. Mix in the sugar, egg, vanilla and bourbon, then the spices. Sprinkle the baking soda and salt over the mixture and mix in. Add the flour last, mix. Pour mixture into a buttered 4×8 inch loaf pan. Bake for 50 minutes to one hour, or until a tester comes out clean. Cool on a rack. Remove from pan and slice to serve.

(Because I used these muffin/loaf tins, they were out in a half an hour. Adjust for your tin as you see fit).

Yummy! I love banana bread with a pure and abiding love, it is great to have a recipe to add to the list, plus the bonus of imagining you making it in your PJs. Of course the whole raisins over chocolate in baking thing is pure nonsense, I'm sure that was just a typo.