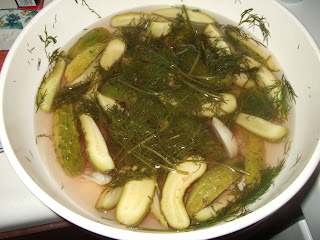 I went to the Trout Lake farmers' market with my friend Amanda on Saturday. It's so great at this time of year, and as much as i love the West End, i have to admit that the TL market kicks WE market butt.

I picked up a huge bag o' basil to make pesto (i'll share that in a future post!), beautiful beets and pickling cucumbers, because Amanda promised to share with me how to make pickles.

This isn't the kind of recipe you use to keep in your cupboard for all winter. I don't think i'm a careful enough cook to do that (visions of botulism affecting all of my pickling giftees). This is an eat-in-two-weeks-from-the-fridge recipe.

Put everything except the fresh dill (if using seeds, include these) in a pot on the stove. Heat until the sugar dissolves (about to boiling point), then pour over the quartered pickles and fresh dill in a bowl. I used Hawaiian sea salt from my recent visit there, so my pickling juice was pink!


Put a plate on top of the pickles in the juice to push the pickles down into the juice, and chill for at least two hours. Amanda swears you should wait at least 24 hours to eat them, though i cheated. Some smaller pickles are bitter, so waiting 24 hours will get all the bitterness out.

I'd also add a little less salt next time, i think. Otherwise, they're super delicious. And i've almost eaten my body weight in pickles now. Yum!
Posted by Anicka at 4:55 PM

Yummy! Now, are there pickles that involve cardamom pods flavouring? Claire and I had thought that cardamom was the "ultra-spice"--savoury, sweet, baking, curries...you name it. But pickles may be beyond the fragrant frontier of the ultra-spice. Way to think outside the box, Anicka! And all hail to dillweed!

Sounds totally delicious and I'm excited to say that while I was driving around on Saturday, I listend to a CBC program all about pickling and canning! Anyhow, I learned that botulism can't live in vinegar, so supposedly you don't need to worry. Maybe don't test that theory until we get it confirmed though.

I'll be over to nosh on some pickles soon!