Baked Rigatoni with Broccoli and Gorgonzola 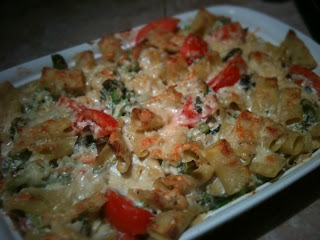 I’ve known my dear friends Shelley and Christina for over 20 years—from back in high school when Shelley wore her signature fringed suede jacket, and Christina and I shared a grade-10 love of Sarah McLachlan (and sadly, copped much of her style then too.) Christina’s now the bass player in a Weakerthans-esque band named Man Missile and Shelley’s just days away from dropping a kid (but I’m fairly certain she’s hung on to that fringed jacket ), but one thing hasn’t changed: whenever we get together, a lot of food is going to get et. Calories be damned. There’s usually banana boats.

Shelley’s been a vegetarian for as long as I’ve known her, so she has a decent recipe collection. This one’s a go-to of hers, and it’s kind of a deluxe mac ‘n’ cheese, from a cookbook that I’m now thinking I’ll track down myself: Vegetarian Planet: 350 Big-Flavor recipes for out-of-this-world food every day. (Besides this recipe, for example, it includes one for technicolour antipasto and another for black-out chocolate pudding. Enough said.)

As far as this one goes, I love any recipe that includes gorgonzola. Or cheese, really. And it’s super quick to put together – no fussing with a roux to thicken the sauce, because you’re using already-thick ricotta. Shelley freestyles with some portabello mushrooms.

I recommend following up with a good old-fashioned banana boat: open one up, scoop out a bit of the insides and stuff it with chocolate chips, peanut butter, caramel sauce – whatever can amp up the calorie count. Wrap in tinfoil, stick in the oven (or campfire, if you’ve got one available) til gushy. Eat with dear friends.

Bring a large pot of salted water to a boil. Add the pasta, and boil, stirring occasionally, until it is just tender. Drain the pasta, rinse it well with cold water. 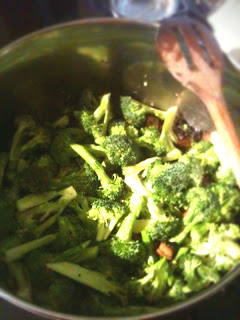 In a large skillet, combine the olive oil and garlic over low heat. Saute the garlic for 2 minutes or until the garlic releases its aroma (do not let it brown). Add the mushrooms and stir fry three to four minutes,until they let their juices out and start to brown. Turn up the heat and add the broccoli and 1 cup of water. Cook the broccoli, uncovered for 3 minutes or until most of the water is evaporated.

Add the ricotta cheese and the gorgonzola. Stir the sauce until it is near smooth, and season it with salt and pepper.

In a bowl, combine the pasta, the cheese broccoli sauce, the tomatoes and 2/3 cup of the parmesan or asiago cheese. Add more salt and pepper to taste, if necessary. (At this point you can refrigerate themixture for baking later.

Preheat the oven to 400 F. Spoon the mixture into a 9-by-13 inch casserole dish. Sprinkle the remaining parmesan cheese over the casserole. Bake the casserole, uncovered, for 10 to 15 minutes (or a little longer if the mixture has been refrigerated). Spoon the contents on to plates, and serve.
Posted by Anicka at 7:01 PM

Yum this looks like an instant favourite. I totally agree with you about the gorgonzola thing--instant deliciousness. (I just experienced dates stuffed with gorgonzola, for example, and became so swoony I could hardly finish the rest of my meal). ANYWAY, love the recipe, and love the insight into the old friends. So lovely!